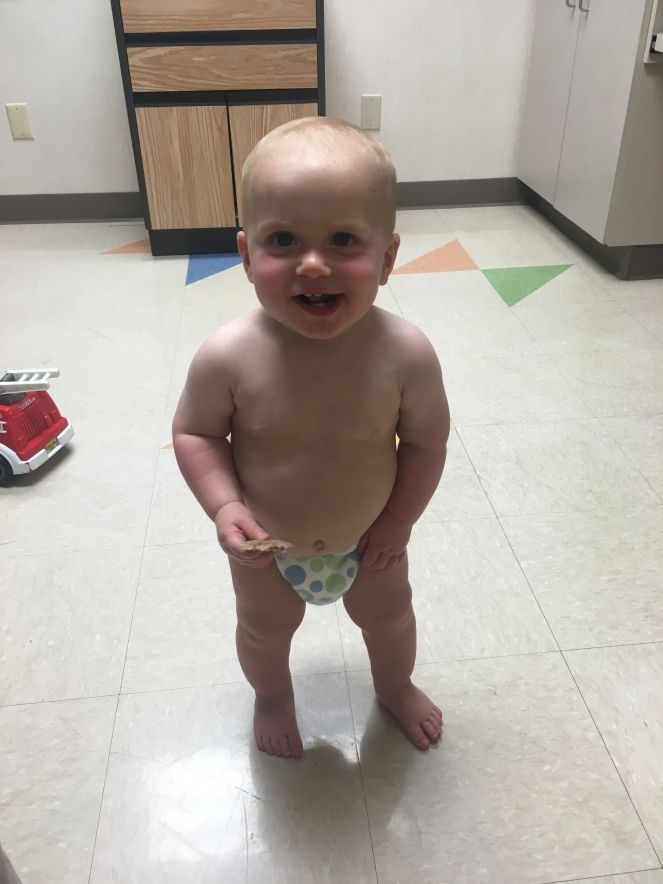 We have already enjoyed one full year with our sweet son Scout, literally the fastest year of my life thus far. As milestones come and pass, I am constantly trying to slow him down. It is surreal for me to see him grow and learn new things right before my eyes. Witnessing childhood, at all its stages, is one of the most astounding things. And at just 12 months on the planet, their ability for them to be able to communicate, walk upright, and comprehend instruction is beyond me.

Having a second son, who is as similar as he is different from my oldest son, is such a blessing. Their already apparent personalities complement each other in such a delightful way. Solidifying for me, how they were carefully crafted to be brothers.

Speaking of brothers, Scout is definitely bigger than Sawyer was at this same age, weight-wise. At his doctor’s appointment, the nurse actually had to weigh him twice because the computer asked “are you sure?” when they entered his weight. No joke, it was concerned with the 3 pound weight gain from a month prior.

Sawyer was much more of a chatterbox, but Scout is quickly finding his voice in the family. Besides being smaller at this age, Sawyer’s hemoglobin level came back that he was anemic and he had to be put on iron. Scout’s blood draw was perfect, so no iron for him. He did have to get 4 shots at his 1-year check up; it was pretty rough!
Here is Sawyer at 12 months:

eating: I have officially stopped visiting him on lunch to nurse. Now I nurse in the morning and at bedtime and at lunch he gets cow’s milk and regular food. The doctor said no food is off limits now and he has already tried peanut butter, eggs, blueberries, and so many other things. Over the next few weeks I will drop the morning feeding as well and then finally the night feeding. I have a feeling I will be more emotional than he will be.

sleeping: sleeping the same, from 7:00/30 p.m. – 6:00/30 a.m. Takes about two naps during the day, one morning and one afternoon. At school they have cut out the morning nap and moved him to a cot out of the crib. He is doing really well with that.

teething: still has 5 teeth with one coming in on top and two more on the bottom about to break through. So, three (almost four) on top, and two on bottom.

other updates: He has said “Momma” finally but not very often. I have heard him say it twice, but as soon as he realizes I am listening he stops. He has learned to blow kisses, which is adorable. He also waves and says “bye bye”. One of his favorite things to do it point and say “that”. He loves to sing in the car with his brother and still constantly saying “dada”. He is a muscle man and pushing everything he can get his hands on around the house.

Here are a few more photos from the month: